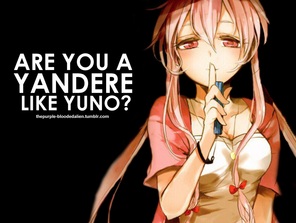 Yandere is a portmanteau of two Japanese words yanderu (病んでる) meaning a mental or emotional illness, and deredere (でれでれ) meaning to show affection or defined as strongly and deeply exhausted, infatuated, moonstruck, head-over-heels, or love struck. It is to used describe a person who is initially very loving and gentle to someone (or at least innocent) before their devotion becomes destructive in nature, often through violence and/or brutality. Yandere characters are portrayed as mentally unstable, and sometimes are incredibly deranged and are not mentally sane, often using extreme violence and or brutality as an outlet for their emotions. Another definition of a yandere tells us that a yandere is an anime character who is either psychotic or violent or both (varies on case to case basis), and shows affection to the main character.

In Japanese fiction, a yandere usually is a fictional character that fits the archetype of being genuinely romantic, loving, kind, merciful, sparing, sweet and gentle, but is at the same time brutal, psychotic or deranged in behavior. The psychotic tendency can be both sudden and ever-present. Often used for both comedic and dramatic displays of character.

Yandere is Japanese slang for bipolar. Yandere characters usually have a lot of mood swings. They have a nice side and an evil side, kinda like ying and yang, white and black. They quickly change from the nice side to the evil side, and repeat again and again. It is more often used in anime/manga. There is often another character, usually can be stiff as a board easily, who is normally the 'victim' of the yandere character's evil side.

Contrary to popular belief that it is the opposite of a Tsundere, well it definitely is the opposite since a Yandere character is obsessed and openly showing her affection to her love interest while a tsundere character usually acts cold at first then gradually warming up. It became a popular Moe genre after the airing of the last episode of School Days.

The usage of the character type has led to criticism over the amount of violence in works such as School Days, a classic story of a love triangle gone dangerously wrong. Although the character type has been used in anime and manga since Mobile Suit Zeta Gundam in 1985, conscious use of the term only began to be around the turn of the millennium.

A classic (and rather extreme) example of yandere is Yuno Gasai, from the manga/anime Future Diary, who is prone to kill anyone who may interfere with her obsessive passion for the series protagonist Yukiteru Amano (or just even be near him without any romantic contact). Another, and not commonly known, is a character from Kaori Ozaki's work, Knife. The protagonist in the first chapter, Kiriko, jumps off the bridge to get the target to go out with her. She also only wants to date him, other than that, there is no violence involved.

Yandere are usually, but not always, female characters, and are usually depicted as villains, making them anti-heroines at best but often the only evil team mate when on the good guys' team. For example Rolo Lamperouge from the Code Geass series can be considered a yandere for his ruthless devotion to the series protagonist Lelouch (who himself rises in arms against his father and his empire to create a better world for his little sister), as his affection grows to the point he will attempt to kill even those who are close to Lelouch in order to not be replaced. More good (and otherwise Anti-heroic) examples would be Belarus from Axis Powers Hetalia, or Hatsune Miku and Megurine Luka in the song "Scissorloid". Western/non-anime or manga characters that are similar in concept to a Yandere such as Annie Wilkes in Misery fall under the Abhorrent Admirer trope. Sometimes, they can just be played in a comedic, usually exaggerated, context.
Powered by